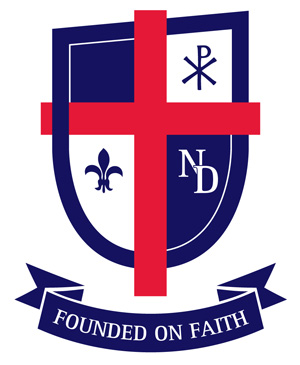 Heraldry has been adopted for thousands of years as a way of ‘family identification’. This shield symbolises our connection to this tradition. It identifies us as part of the Notre Dame Catholic Primary School family and allows us to be recognised as such in the wider community.

Historically, the shape of shields changed over the centuries at the discretion of the artisans and heralds who crafted them. The lack of symmetry in this shield gives this design a more modern look – a mixing of the old with the new, the traditional with the contemporary.

The cross is one of the earliest and most widely used Christian symbols. In the broadest sense, it symbolizes the religion of Christianity. More specifically, it represents and memorialises Christ’s death.

The cross is central to the crest as it is to our Catholic faith. The colour red symbolises the love Christ showed to all humanity in dying for us so we could be re-united with God. One arm of the cross lies under the crest reminding us that Christ is present within our school while the cross extends outside the crest symbolising our faith reaching out into the wider community.

The Chi Rho is one of the most ancient ‘sacred monograms’ of Christ. The symbol was developed by the early Christians as a secret sign of their faith. This monogram is composed of the two Greek letters of the word ‘Christ. It was later adopted by the Roman Emperor Constantine on his conversion to Christianity and became the symbol of the Church.

The Chi Rho connects us with part of our story. It reminds us that Notre Dame Catholic Primary School was founded on the traditions of two schools – Holy Name Carlisle and Notre Dame School Cloverdale. The Chi Rho was a visible sign of Christ’s presence at Holy Name School. It was integral to the school crest and its presence in the crest of Notre Dame Catholic Primary School will remind future generations of this connection.

The English translation of ‘fleur-de-lys’ is ‘flower of the lily’. Traditionally, it has been used to represent French royalty and in that sense, it is said to signify perfection, light and life. The Church has ascribed the lily, a symbol of purity, as the special emblem of the Virgin Mary.

Since the first century, devotion to the Blessed Virgin Mary has been a major element of the spiritual life of many Catholics. From the council of Ephesus in 431 to Vatican II and Pope John Paul II’s encyclical ‘Redemptoris Mater’, Our Lady has come to be seen not only as Mother of God but also Mother of the Church. Our school name, Notre Dame (Our Lady), continues this tradition.

The initials ‘ND’ complete our ‘family’ story. Out of the Chi Rho and Fleur-de-lys emerges a new entity – a school proud of its heritage but forging a new identity. The initials represent the new, contemporary Notre Dame.

The colour blue is associated in Christianity generally and Catholicism in particular, with the Virgin Mary. Symbolically, blue represents life, purity and cleansing.

The colour blue carries with it the symbolism of peace, intelligence, loyalty, strength, security, stability, wisdom and unity. These qualities are critical to the formation and ongoing development of Notre Dame Catholic Primary School.

Navy blue was chosen as a symbolic colour to connect the two schools of Notre Dame, Cloverdale and Holy Name, Carlisle as the colour blue is represented in both the old logos and uniforms of the two schools. Navy, as the predominant colour, connects the old with the new.

White universally signifies peace, an indication that an agreement between two parties has been reached. White is associated with goodness, innocence and clarity. It is considered to be the colour of perfection.

The colour white was chosen because it projects purity, cleanliness and neutrality – a very important aspect in the amalgamation of the two school.

In our Catholic faith traditions, red is the colour that symbolises the presence of God and is considered the colour of the Church. It is the liturgical colour of Pentecost, the celebration that marks the birth of the Christian church. At Pentecost, the Holy Spirit descended on the apostles – the same Spirit which we call upon to guide us on our journey at Notre Dame Catholic Primary School.

Red, in its most positive sense, is the colour for courage, strength and pioneering spirit. Red signifies energy, liveliness and love. It evokes confidence and determination as well as leadership.

The colour red was chosen because it adds life and vitality to the dominant colours of navy blue and white. The colour red is vibrant, eye-catching and powerful and is linked to the soul of every individual at Notre Dame Catholic Primary School. The strength and pioneering spirit of the school and each individual is reflected through this colour.